"Doc, I can't stop singing the green green grass of home."
"That sounds like Tom Jones syndrome."
"Is it common?"
"It's not unusual."
Read more

So I was getting into my car, and this bloke says to me "Can you give me a lift?"
I said "Sure, you look great, the world's your oyster, go for it."
Read more

I can only go back in time as far as 1961 when I was born, in Kingston upon Hull where Mum and Dad and Brendan my Brother moved to. Brendan was born whilst Dad was at Stationers Company School. We lived on the outskirts of Hull in a beautifull village called Kirkella. Dad was a 'music advisor' for Hull Education department, as well as conducting the Hull Youth Orchestra et al. The garden to our house Saint Andrew's Mount backed onto the local parish church Saint Andrew's where Dad would occasionally play the organ on a Sunday Evening. We were more involved with a church in the centre of Hull, the name of which escapes me at the moment. I (just about) have memories of sitting in the organ loft with him. I do, however, remember being able to hear the St. Andrew's organ being played by Dad from our back garden! if we happended to be absent from church.

At an early age of 18 months I contracted galloping pneumonia which so I am told and read was life threatening. One night in the hospital (in the eyes of the doctors) could have been my last. Dad couldn't cope with the upset so he went home and joined the local church in a vigil of prayer for me (can you believe it) and miraculously I survived. He moves in mysterious ways, so does God.

Dad had an incredibly strong faith, made even stronger by his musical ability. He loved to talk, to show off and be the centre of people's attention. If he entered a room full of people, royalty or children, everybodies attention would be naturally drawn to him. Quite uncanny.

During my younger days Dad examined both here and abroad for the 'Trinity College of Music, London' examination board, adjudicated at music festivals all over Britain, held Youth music workshops in America, some of which we went along too as guests. We moved from Hull when I was 5 in 1966 when took up the post of Senior Music Advisor for the City of Sheffield. Did you know that as well as being a Fellow of Trinity College of Music, London, Dad held a London MA, DMus and Hon.MusD. Not bad for somebody who didn't practise and arrived late for a final's exam. (Needless to say he passed with flying colours).

Sheffield, I still say to this day, is where my childhood began and where we made alot of friends, not that we didn't have any from our days in Hull. Brendan and I went to the local Infant and later Junior school half a mile away from our house, and I remember the odd time seeing Dad in school in his official capacity. He was the same person at his work as well as at play.

By now we had made contact with Sheffield Cathedral where both Brendan and I were choristers, infact we were both head choristers at different times of course. Dad became the honorary assistant organist playing the organ for the 9.30am Sunday Parish Eucharist. This service always had a large "Clover organ playing followers" congregation, and I would usually sit with Dad at the console untill I had to leave for our morning rehearsal at 10am. The choir master Graham Mathews became a close family friend. I remember being able to have a conversation with Dad whilst he was playing the organ (both hands in use as well as both feet), whilst he was looking for the next hymn or organ piece. I used to wonder how anyone could do that. He had a gift which I have not seen anywhere else and I have seen a lot of professional musicians in my time. I don't know if you knew that he had a photographic memory. That is why he was able to play a Bach fugue with no music. The 9.30am (Series 3 - Remember this) congregation often commented on the fact that they didn't know if they were listening to Bach or Clover. This became one of his trademarks.

During my early teen years I began to realise how much musicactivity Dad was involved with.

It doesn't look as busy as it in fact was. All I can say is that there was only one night during week days we had Dad home before 10pm. Sundays was always his family day, something special to us all. No computers, no going out to the pictures or friends, just church (the Cathedral), family and may be a little telly at night. The good old days?

Many of our holidays were spent in a caravan which we owned. We would fill the caravan, set off and usually arrive somewhere in Wales. Very pleasant although we did fancy a change. The holidays were usually built around a music festival or eistedfod.

I am grateful to Malcolm Wakefield (a former member of Stationers Company School) for his encouragement to write this page. I seem to have left updating this page a long time and feel guilty about Malcolm's gentle reminders. 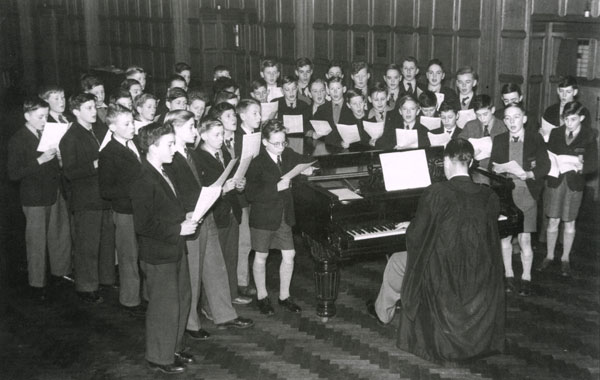 Dads passing away January 6 1978 hit everybody hard. Having said that once the pain has died away it is amazing how one adjusts. We have all lost someone so most of us can relate to this. The passing of time does heal the wound and the fond memories of what had gone before remain with me for ever. I can count myself lucky that although 17 years (that's how old I was in 1978 - you work it out) is not long enough to get to know one's parents, it may be 17 years more than some peole get.

His memory lives on.
There are vinyl recordings of the British Youth Choir & Chamber Orchestra concerts, I will make these for you to to download.
There is the David Clover Festival of Singing held in Sheffield every year, supported and sponsored by Sheffield Teachers Choir an event we try to attend each year.
There is still sheet music composed by Dad available. Indeed I have just found this on the internet Saturday Morning by David Clover and many more like it.
There is a recording of Dad accompanying the Dramatic Society of The Stationers' Company School in their 1958 production of 'Cakes and Ale', (again, supplied by Malcolm and available for download HERE)
There are many pictures and memorabilia of the early days at Stationers Company School and also a few church organs where Dad played. Again images supplied by Malcolm.